Shoprite's share price has rocketed almost 22% in two days, after the company reported strong annual results. Sales in SA grew by almost 9%, and Checkers in particular grabbed market share - probably from Pick n Pay. Across the group, prices rose by 3% over the past year - from only 1.2% in the previous year.

Shoprite’s latest set of financial results triggered an almighty rally in its share price, which rocketed almost 22% in two days, and added a cool R15 billion – almost a whole Truworths, measured in market capitalisation – to its market value by end-Wednesday.

Shoprite’s share price since the start of the year.

Its annual numbers were “ridiculously good”, according to fund manager Keith McLachlan, as the retailer grew sales, stole market share, increase its headline profit by almost 17% and hiked its dividend by 20% for the year.

At its South African supermarkets, sales grew by almost 9%, with their trading profit jumping 13% to more than R18 billion, the group reported on Tuesday morning. Shoprite says the group has now gained market share for 16 consecutive months, and in the past year stole R4.9 billion in sales from its competitors. 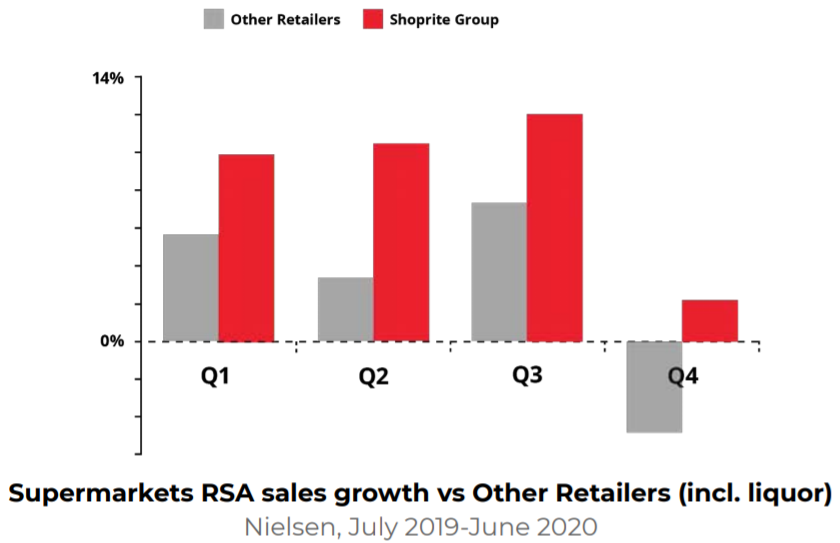 It’s clear that the group is taking market share from Pick n Pay in particular, says FNB portfolio manager Wayne McCurrie. Pick n Pay managed sales growth of less than 5% in the year to March – before the lockdown hit.

Checkers grabbed perhaps the biggest market share from competitors, and the group said in a statement that its “assault” on premium food retail had been successful, as it increased its “share of wallet from upmarket shoppers”. The group managed to grab market share because of its logistical ability to keep products available, and thanks to its competitive pricing, says McCurrie.

But while its products may be cheaper than those in many other stores, it saw a solid increase in its prices of an average 3.0% over the past year, compared to internal selling price inflation of only 1.2% in the previous year. Since the start of the new financial year, it has managed to increase prices by an annual rate of more than 4%.

Shoprite margins will continue to benefit from a bit of food inflation that it is coming through, says McCurrie.

The group is also seeing strong growth in sales of its private label goods, which now represent 17% of its total sales, and more than half of all shoppers purchased these products in the past year.

At the end of the June, Shoprite maintained a net cash position of R10 billion, from R3.6 billion at the end of the previous year. The company managed to reduce its net borrowings by 76% – from R8.1 billion to R2.0 billion in a single year.

Weighing on its results were its supermarkets outside of South Africa. While its stores in 11 out of 13 countries sold more in local currencies, exchange rate losses – especially in Angola – were substantial. The group will now close its stores in Kenya, and is in talks to sell its Nigerian chain.

Despite record revenue over the past year, Shoprite’s share price is still down almost 47% from two years ago. McCurrie rates Shoprite “probably a buy” – even after the blistering rally this week.

« Ethiopia acquisition for dmg events in African expansion » Level One – What does this Mean for the E-Commerce Sector?